Originally created as a base for training bomber crews and later a base for ex-prisoner reception in WWII, the 650-acre Westcott site became a Government Research Establishment known as a Guided Projectile Establishment on 1st April 1946 followed by other government departments.

Century Court will comprise two terraces of industrial units offering space from 2,000 sq ft to 6,000 sq ft built to a high specification. Once completed it will be the only scheme to offer newly built warehouse accommodation in the area.

Over 200 former veterans gathered alongside established rocket specialists operating at the park to join the day of activities, which was supported by The British Interplanetary Society showcasing rockets and equipment on the day. The day’s events also included a a tour of the park as well as a two-course meal and a raffle in in support of Help for Heroes as well as RAF Benevolent Fund, which raised £165 on the day.

The establishment at Westcott was the most significant location for rocket propulsion research, development and testing in the UK. Major missile propulsion programmes were developed such as the Blue Streak, Black Knight and the highly top-secret Chevaline but Westcott’s rockets have also been used for space missions such as that to Mars in the 1990s. In the 1950’s around 1,200 people worked at the park carrying out research and development into rocket motors for guided missiles. A Westcott Waxwing rocket motor was used in the UKs only satellite launch in 1972. Companies at Westcott continue to play a key role in providing rocket engines for interplanetary missions including the JUNO Mission and the Rosetta probe to name just two.

Over the years the park has developed into a major space production hub and despite being open to the wider business community, it remains at the forefront of liquid propellant rocket motor research and development. Now owned by Rockspring Hanover Property Unit Trust, Westcott Venture Park is home to a wealth of propulsion specialists including: Airborne Engineering, European Astrotech, Moog ISP UK, The Falcon Project and SSTL to name a few.

Westcott Veteran Di Hickman who worked in the rocket sector at Westcott for over 44 years says: "I worked alongside fellow Westcott veteran Barbara Hood and Ed Andrews from the Westcott Venture Park management team to bring this fantastic event to life. We were delighted with the turnout of over 200 people travelling from as far away as Scotland to join our day of celebrations. This event was a really significant gathering of the UK Rocket Science community, with many people reunited for the first time in decades."

Rockspring has recently accelerated it’s investment in the park by developing Phase 1 of a new industrial development known as Century Court, as well as an estate road and gatehouse complex. The park is managed by Lambert Smith Hampton and is recognised as the largest business park in Buckinghamshire with over 75 business tenants employing over 500 people. 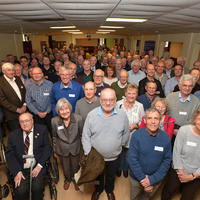