The village of North Marston in Buckinghamshire honoured the lives of six young airmen on Saturday 25th April (ANZAC Day) when a memorial plaque in St Mary’s Church was unveiled by Air Marshall Sir Colin Terry KBE CB DL, Deputy Lieutenant of Buckinghamshire. The church service was attended by one hundred and sixty people including members of the British Legion, the Royal Air Force, the Army, the ATC, the Royal New Zealand Air Force and the Tovil Scouts from Maidstone (of whose pack the young air gunner, John Wenham, was a member as a boy). Thirty relatives of the crew attended the service, including seven who had flown over from New Zealand.

The men who lost their lives were the crew of a Wellington bomber that crashed in North Marston on the night of 4th January 1945. They were in Bomber Command training at RAF Westcott and had just taken off for a night navigation exercise when the plane fell from 5,000 feet. The cause of the crash is unknown. The plane crashed in a field on the edge of North Marston and the site of the crash was marked by flags and opened to the public on the day of the Dedication Service.

North Marston villager, Chris Holden, who had vivid memories of the crash back in 1945, had always expressed sadness that there was no memorial in the village to these young men. When Chris died, his daughter Jayne Springer donated the money collected at his funeral towards the cost of a memorial plaque. North Marston History Club raised the rest of the funds from local contributions.

The History Club has also been successful in tracing the relatives of all the crew who have sent family photographs, documents and letters. These, together with information from other contacts, such as Ed Andrews at Westcott Venture Park, and some extensive research, has enabled the History Club to put together a book about the event entitled Six Young Lives which can be obtained through the Club’s website.

The Club arranged for the relatives to visit the graves in Oxford, the crash site and the training base at RAF Westcott, from where the crew flew the night they were killed. Ed Andrews acted as a guide to the old WW2 sites of Westcott Venture Park on half a dozen different occasions, showing round members of North Marston History Club and various sets of relatives, some of whom had flown over from New Zealand and Canada. New Zealander Neville Selwood, now in his nineties, trained at Westcott and became a Lancaster navigator with 75 Squadron; he was a friend of the air-bomber, Alex Bolger and was represented at the North Marston service by his nephew who wore his WW2 medals. Alex Bolger’s niece also read a prayer, which Neville had written.

The event, which included a buffet and wartime displays in the village hall, was co-ordinated by History Club Secretary, Sue Chaplin, who said in her introduction to the service: “All of us who have been involved in investigating this tragic crash, and tracing the families of the boys who died, have found it extremely rewarding but also very poignant. We have been pleased to be able to clarify some of the details of that night and have been heartened that the families now know of each other. We have met through email and in person some wonderful people and the photographs, letters and family stories we have been sent have proved very touching. We have been overwhelmed by the kind generosity of so many people, both in the village and outside, who have supported us in our venture.” 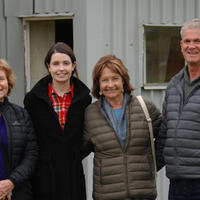 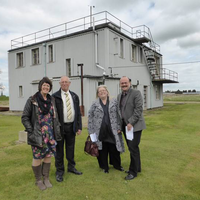