Over the two-day event, 26 students on the course got to experience and conduct a wide range of activities and tasks, including launching water rockets and sending a space balloon to the edge of the atmosphere, plus witnessing the test firing of a real-life rocket engine. They also worked on pi-tops computers which were used teach electronics and coding. The cadets made and programmed their own circuits to ignite a miniature rocket. It's new technology that makes computer science fun and easy to learn.

Ben Shamash who attended the course said: “The highlight for me was getting into the SCAPE suits. Space Camp is really fun and I would recommend it to anyone!”

Harry Cave, also on the course said: “I think everyone enjoyed the presentations. The rocket science talk was great! Space Camp showed me there is a big spectrum of jobs in the space industry.”

The event grew out of the strong demand for work experience placements from students contemplating a career in STEM (Science, Technology, Engineering and Mathematics). Unable to accommodate every request, European Astrotech decided to put on an action-packed event to inspire as many young people as possible to go into this field.

Some of the rocket companies based at Westcott Venture Park took part in the two-day course including Chris Smith of European Astrotech, James McFarlan and Ed Moore of Airborne Engineering, Rob Wescott of Nammo and Philippa Davies of Reaction Engines.

Sammy Graham, propulsion engineer said: “We wanted to inspire students to explore and challenge the boundaries of what we know and encourage them to choose STEM careers by giving them a hands-on experience of space science and engineering.”

“I started getting lots of calls from students aged around 16-18 asking to come into the company and do a week of work experience”, recalls Sammy. “When I got over 10 calls in a couple of days I decided then to put on two days of hands on science and engineering related to the space industry, and engineering jobs in general. I wanted to give the students an experience of what it’s like to work in the industry and show them the range of opportunities and how much fun it is as well. I then started talking to a few of the other companies at Westcott, and they were also really keen.”

Successful completion of the course gained the students an Industry Cadet Bronze award, recognised by companies across the STEM world and helping to open up a network of opportunities for further placements and jobs as the students grow older.

The space camp is particularly valuable given the current drop off in interest for STEM subjects between GCSE and A-level, particularly amongst girls. “I think a lot of it is they just don’t know what’s out there”, says Sammy, “and that’s part of our rationale at European Astrotech: showing them the range of opportunity available. As she also points out, you don’t need to be a ‘maths genius or an astronaut’ to forge a career in the space industry, given the wide range of roles available.

Sammy adds, “Recruiting for companies based at Westcott is sometimes difficult, because of the lack of talent out there. With this camp we wanted to make sure that was really fun, but also that young people have come away inspired about science and engineering. We hope to expand it next year and subsequent years, and involve even more companies based here and beyond.” 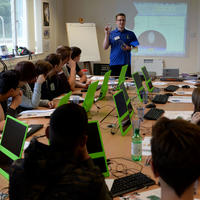 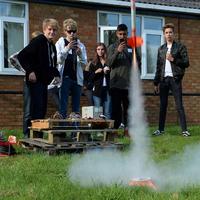